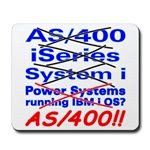 Ken Jack, a software engineer at trucking software company TMW Systems, has created the T-shirt you see to the right. He has it on his personal CafePress website called iWhatever.

Jack reflects the anguish of many System i users — er, users running i on Power Systems — who have a hard time figuring out what to call the server platform on which they run all their business applications. In a recent story on feedback of the System i/p merger, one user told me that he spent a long time trying to convince everyone in his organization that the server and platform should be called System i and i5/OS, not AS/400, iSeries, or OS/400.

Now that IBM has renamed it again to Power Systems and just “i,” expect some folks to just say forget it and start calling it AS/400 again.

That’s how Jack feels, as is apparent by this T-shirt he’s selling. He’s been selling a similar shirt for a while now, just adding on whenever IBM decides to rename the platform again.

“It’s honestly to the point where if IBM changes the name one more time, I’m going to have to put ‘continued on other side…’ on the front of the T-shirts,” Jack wrote in an email to me. “Just last month somebody bought a shirt that stopped at ‘System i.’ I bet he’s pissed.”

What are they calling it at TMW Systems? Jack said that “everybody at our shop still calls it ‘The 400.’ ‘Power System running i’ is just too much of a mouthful.”

By the way, in addition to buying the T-shirt, you can also buy other merchandise with the logo on it: mousepad, coffee mug, baseball cap, etc. 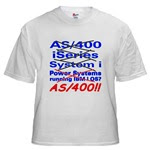