Inside the neo-modern building of a Bangalore outsourcing company, thousands of workers go through an unusual exercize each week. As they arrive at work, they must pass a clipboard full of newspaper cuttings enumerating job losses at outsourcing companies in the city. MphasiS axes 200 in Bangalore, says one. Sun Microsystems lays off 150, Sapient cuts 300 and so on.

The company's strategy is having a curious impact on employees. As measured by company executives who do not want the firm's identity to be disclosed, workers are performing better, making less demands of the company and appearing to value their jobs more highly than before the clipboard went up.

(...) Workers are now recalibrating themselves to demonstrate higher productivity and greater loyalty to their employers. They are not taking their jobs for granted, nor are they assuming the subsidized lunches at the café or the free buses to work will last forever.

Many Indian outsourcers are remodeling their businesses to prepare for the full impact of the downturn. For a long time, these firms have remained India-centric in their operations.

This will have to change, according to Siddharth Pai, managing director and partner at the outsourcing advisory TPI India. Indian outsourcing companies will have to globalize by taking on delivery capability from different cities across the world, Pai told me.

The good news is that the current recession has made global acquisitions cheaper than ever before for the cash-rich among the outsourcing firms.

Many top Indian outsourcing companies, including the Bangalore-based Infosys Technologies and Wipro, started off by executing work on hourly and day rates. Many have since moved up the value chain to project-oriented pay scales and annuity-based contracts.

Now they have been forced to take a percentage of the value of business delivered as their revenue.

HCL Technologies will charge Nokia on a 'per ticket per month' or 'per device managed per month' basis. The outsourcer will deliver multicountry and multilingual (13 languages) services through its global delivery centers in China, Finland, India, Poland and the U.S. 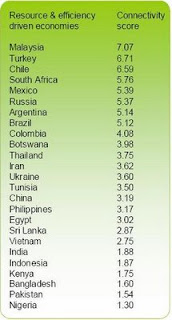 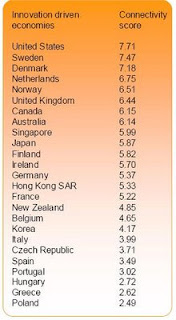 Connectivity is usually understood to be the copper wires, fibre-optic cables and networked computers, and more recently mobile phones and base stations that enable the fast flow of information regardless of distance. The associated costs are much lower than the costs of physical travel, and much lower than these costs were just 15 or 20 years ago. Connectivity is the key enabler of the flow of information that defines modern economies, and it is the key enabler of an ongoing (and sometimes overlooked) transformation in the economic fortunes of many Asian and African countries.
We define “connectivity” in a much broader way to embrace more than just infrastructure and hardware. The notion of connectivity should be expanded to include also the complementary assets (software) and skills — embodied in people, governments and businesses — that determine just how productively the hardware and infrastructure are used.
In summary, we use the term “connectivity” to refer to the totality of interaction between a nation’s telecommunications infrastructure, hardware, software, networks, and users of these networks, hardware and software. Thus broadband lines, PCs, advanced corporate data networks and advanced use of wireless data services are certainly measures of connectivity, but so are human skills relevant to the usage of these infrastructures, technologies and networks.

[Conectividad útil refiere a ] the ability of connectivity to contribute to economic growth, especially through improvements in productivity that are widely held to be the key to sustained economic prosperity. The concept of “useful connectivity” is first and foremost an attempt to recognise that the economic value generated by connectivity depends not just on conventional measures such as broadband lines or computers connected, but also on who is using those lines—businesses or consumers—and how well they are able to use the lines (captured by measures such as user skills, software assets, use of voice-over-IP and the number of intranet hosts per capita). (...) The Scorecard aims to measure “useful connectivity” by making a link between connectivity and economic performance.
[...] Thus in constructing a scorecard that purported to measure “useful connectivity”, we wanted to take into account not just how many broadband lines were being deployed, but who was using those broadband lines—businesses or consumers? How smart were the uses of these lines—for example, what proportion of the workforce had what the European Commission’s i2010 research programme describes as “ICT user skills?” [ICT = Information, Computers, Telecommunications]

Thus the Connectivity Scorecard methodology:
• divided the economy into the consumer sector, the business sector, and the government sector,
• gave weights to the consumer sector, business sector and government sector that matched their importance in economic activity,
• split each of the consumer, business and government categories into “infrastructure” and “usage and skills” components and allocated individual measures to either of these two sub-categories3, and
• allocated weights to the “infrastructure” and “usage and skills” categories.

A wide range of individual measures/metrics/indicators was selected, reflecting elements of both infrastructure and usage. A full list of these indicators is presented after the tables and figures in Section 4 of this report – ‘Connectivity Scorecard 2009’.
The weighting of the infrastructure and usage and skills categories was based upon economic considerations and are unique in the literature. First, the weights for each sector are country-specific and are drawn from national GNP accounts. The weights for the infrastructure versus skills subcomponents used data from research into the sources of productivity enhancement.
Thus the selection of categories, sub-categories and weights reflects an ambitious attempt to capture whether countries are investing in the right places, are matching their infrastructure investment with the right skills, and whether they are succeeding in enabling adequate levels of both access to, and usage of, key technologies.

In January 2008 we computed two separate Connectivity Scorecards—the first for a group of 16 countries, covering mostly the innovation-driven (Tier 3) economies but also some economies that are making the transition towards being innovation-driven: Hungary, Poland, the Czech Republic and Korea are examples. The second Connectivity Scorecard covers nine countries, and uses different assessment metrics.
The countries covered by the second Scorecard are resource and efficiency-driven economies. The terms “resource and efficiency-driven” and “innovation-driven” are borrowed from the World Economic Forum (WEF)’s classification.
[El estudio de este año 2009 incluye veinticinco países por tipo de muestra, y amplía el número de indicadores]
[Refiriéndose a los cambios en el nuevo análisis 2009]
The other “novelty” in the weighting system was the manner in which we allocated weights to the “business infrastructure” and “business usage and skills” sub-indices. These weights were based on the relative contribution of information technology investment and increases in the quality of the workforce to economic growth. Where such refined splits were not obtainable (e.g. for the resource and efficiency-driven economies) we used data on the relative contribution of overall capital investment and labour composition to overall economic growth. The idea behind this methodology was to utilise some notion of how much of economic growth has been driven by improvements in infrastructure versus how much has been driven by improvements in the quality of the users of that infrastructure (the work-force).

Given that ours is a composite measure of connectivity which links usefulness to economic performance, there are major economic gains to be had from improving connectivity (as we define it). For example, a well-known study in the United States (by Crandall and Jackson) put the long-term benefits to the U.S. of increased broadband penetration at $500 billion. Holistic improvements in performance could yield long-term economic gains that are multiples of the figure obtained by Crandall and Jackson.
The 2008 Connectivity Scorecard showed that there is much untapped potential in even the most advanced markets. Countries that one normally thinks of as highly connected still score poorly on this scorecard. For example, Korea has a relatively low spend on certain business telephony measures, suggesting that there is considerable room for growth, given the size and wealth of the country and the quality of some of the supporting infrastructure. Likewise, there is still potential for extensive new infrastructure deployments and far more intensive usage of technology in the United States, the country that ranked first on the 2008 Connectivity Scorecard. Notably, the United States did not rank first in any of the three components – business, consumer and government – but did well enough on all three to be first overall
[Conclusiones en base al análisis...]
Governments and policy-makers
“Policy-makers need to evaluate where their country falls short in connectivity performance and strive to either develop the infrastructure and complementary assets that would facilitate better performance, or eliminate the barriers and rigidities that prevent it. A lot of the necessary change will not be easy in the short term, and it may require governments to remove (for example) the barriers that make it harder for businesses to re-organise themselves around ICT, or the import tariffs that protect domestic producers but cost societies much more by raising the price of access and usage of the relevant infrastructure.”
Businesses
“Businesses clearly have a role to play. The economic gains described above are gains to both consumers and to businesses, which are able to perform much more efficiently if they use more technology more effectively. Businesses also have to accept change, while perhaps investing more in “complementary capital”, such as worker training, which will enable them to reap larger benefits from technology.
Further, businesses have to show imagination in the way they use technology. As a complement to the first Connectivity Scorecard, we surveyed IT managers who operated internationally to gauge their satisfaction with the fixed-line and mobile infrastructures and services offered in a range of countries. Somewhat to our surprise, most were quite satisfied with the state of affairs they found. This could suggest that the low scores on our Scorecard are misleading, but it more likely suggests that businesses do not grasp that even existing technologies can be used much more intensively. For example, some mobile banking services and electronic transaction services are better developed in African countries than in the U.S. or Canada.”
The Telecommunications industry
“For telecommunications operators, the Connectivity Scorecard shows that few markets are truly “saturated.” Operators will have to look at the specific strengths and weaknesses of each country and spot the potential for expansion. In India, there are opportunities everywhere — to expand the existing coverage of mobile and broadband networks, and to increase the usage of these technologies from the existing revenue base. However, other less prominent emerging markets also have significant infrastructure and connectivity needs, and operators may benefit from moving early to convert those needs into opportunities. In addition, we emphasise “useful connectivity”, – i.e., the ability of connectivity to contribute to economic growth. Hence, there is much room for operators to assist firms by providing best-in-class training in usage. Thus
operators need to re-focus their attention on the kind of sales that take into account this
concept of useful connectivity.”

The tendency for countries to achieve low scores is especially pronounced in the resource and efficiency-driven economies. There is also a suggestion that there are clearer constraints on performance for some countries. For the bottom 5 or 6 performers, it is very difficult to separate out ICT or connectivity from the overall developmental challenges that these countries face. It may well be the case that any effort to kick-start economic growth by investing heavily in connectivity-related infrastructure may provide only a limited return as the human capital and infrastructure capital—roads, electricity, schools— that is required to successfully utilise connectivity infrastructure will remain under-developed. This is best illustrated by the case of India, which may be a “tech powerhouse” in some respects, but also suffers from enormous problems relating to basic infrastructure and services. Connectivity and ICT can be an mportant part of economic growth for India, but at some point, connectivity will invariably be limited by the fact that there are large swathes of Indian society that do not have the human capital or the infrastructure (reliable power supply, for example) to make the most of connectivity