Become a member of the IBM Academic Initiative to get no-charge access to hardware, full-version software, professionally developed courseware, tools, training, books, and discounts. Let us help you keep up with the latest technologies and reap the benefits of open source. 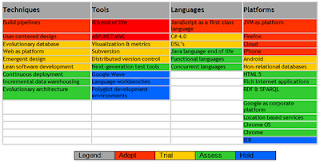 After the sale of its development tools division to Embarcadero in 2008, Borland kept only the tools dealing with requirements management and software testing. This didn’t improve its financial situation and finally Borland sold itself to MicroFocus. This was a sad end for a brand that accompanied software developer for more than 25 years. Software requirements have always been a secondary topic in the software development tools world and the trend towards agility hasn’t improved this. Now you can manage user stories with paper cards and a board. Approaches like UML are declining and you will find few items dealing with them in today’s programmers waterhole like dzone.comstackoverflow.com, The end of Borland is just the symptom that this world is difficult for requirements tools vendors.

Google domination in the search engine world is well known, but as far as developers are concerned, it is amazing how Google is quietly occupying more and more space. Here are some of the software development initiatives of Google:
* Google App Engine
* Google Web Toolkit GWT
* Go Language
* Google open source projects forge
* Google I/O Conference

Google seems to have understood that besides the content, it should also be active in the plumbing that runs the Web. This is why software developers should be interested in what Google does in this area. You could do this following some blogs like the Google Code BlogGoogle Testing Blog. You will see that besides the well-known projects, Google releases a lot of interesting open source tools created by its development team.

Posted by Jorge Ubeda at 8:26 p.m. No hay comentarios.: Links to this post

I am quite sure that I will get a lot of angry flames for this post, but I am not going to sign the petition to “save MySQL”.

I strongly believe in community. In transparency. In openness. I hoped that the fight of Monty Widenius would be about exactly that – making sure MySQL becomes the Open Source database engine for the Free world. Making sure a vivid, creative, open community of users, developers gather around MySQL and make it better.

It seems however that this is not what the petition is about. Here some quotes that leave me with mixed feelings:

MySQL’s database server has traditionally been a product developed and maintained by a single company, not a community project depending on volunteers or on multiple vendors (like Linux).

Well – at least they don’t hide it. But the wording is misleading. It implies that an open source project is either run by a company or by volunteers. This is so wrong that I have a hard time not loosing my temper. Take a look at AMQP. It is a quite good ecosystem around a defined standard. With several implementations. Some of them Open Source, some not. Or take a look at the Linux kernel. Most of the contributions come from people who are actually paid to do this work. Some of the devleopers are employed by Red Hat, some by IBM, Novell, Intel etc.

A real Open Source project is about making something better for the good of all users. Not only for customers. And distributing the development across several companies reduces the risk for every participating entity. So the more the merrier.

However, for MySQL it seems the world is different:

Let me tell you, this is not correct. Red Hat can pay its employees by generating revenue based on the GPL. I would say that Red Hat does quite well with that business model. Look at the stock price.

And if MySQL would be so succesfull with their dual licensing strategy, why did they sell themselves to SUN anyway?

There is a lesson hidden here: If you sell something, you don’t own it any longer. MySQL is now SUNs business. And if SUN decides to sell themselves to Oracle – it is their business. If the MySQL founders and fanboys don’t like this, they simply shouldn’t have sold MySQL to SUN in the first instance.

So we have two possible solutions here. My preferred solution: Oracle takes over SUN and puts MySQL under a single license, the GPL. It also declares all relevant “Intellectual Property” to be licensed Royalty Free up- and downstream.

The current plan offfered in the petition however is based on exclusiveness, something that I refuse to accept. And that is why I personally will not sign the petition the way it is.

To all that quote me, let me repeat again: THIS IS MY PERSONAL OPINION.

Posted by Jorge Ubeda at 8:26 a.m. No hay comentarios.: Links to this post

Oracle claims that it would take good care of MySQL but let's face the facts: Unlike ten years ago, when MySQL was mostly just used for the web, it has become very functional, scalable and credible. Now it's used in many of the world's largest companies and they use it for an increasing number of purposes. This not only scares but actually hurts Oracle every day. Oracle have to lower prices all the time to compete with MySQL when companies start new projects. Some companies even migrate existing projects from Oracle to MySQL to save money. Of course Oracle has a lot more features, but MySQL can already do a lot of things for which Oracle is often used and helps people save a lot of money. Over time MySQL can do to Oracle what the originally belittled Linux did to commercial Unix (roughly speaking).

So I just don't buy it that Oracle will be a good home for MySQL. A weak MySQL is worth about one billion dollars per year to Oracle, maybe more. A strong MySQL could never generate enough income for Oracle that they would want to cannibalize their real cash cow. I don't think any company has ever done anything like that. That's why the EC is skeptic and formalized its objections about a month ago.

Richard Stallman agrees that it's very important which company owns MySQL, that Oracle should not be allowed to buy it under present terms and that it can't just be taken care of by a community of volunteers. http://keionline.org/ec-mysql

Oracle has NOT promised (as far as I know and certainly not in a legally binding manner):

- To keep (all of) MySQL under an open source license.
- Not to add closed source parts, modules or required tools.
- To keep the code for MySQL enterprise edition and MySQL community edition the same.
- To not raise MySQL license or MySQL support prices.
- To release new MySQL versions in a regular and timely manner. (*)
- To continue with dual licensing and always provide affordable commercial licenses to MySQL to those who needs them (to storage vendors and application vendors) or provide MySQL under a more permissive license
- To develop MySQL as an Open Source project
- To actively work with the community
- Apply submitted patches in a timely manner
- To not discriminate patches that make MySQL compete more with Oracles other products
- To ensure that MySQL is improved also in manners that make it compete even more with Oracles' main offering.

From looking at how Oracle handled the InnoDB acquisition, I don't have high hopes that Oracle will do the above right if not required to do so:

For InnoDB:
- Bug fixes were done (but this was done under a contractual obligation)
- New features, like compression that was announced before acquisition, took 3 years to implement
- No time tables or insight into development
- The community where not allowed to participate in development
- Patches from users (like Google) that would have increased performance was not implemented/released until after Oracle announced it was acquiring Sun.
- Oracle started working on InnoDB+, a better 'closed source' version of InnoDB
- In the end Sun had to fork InnoDB, just to be able to improve performance.

It's true that development did continue, but this was more to be able to continue using InnoDB as a pressure on MySQL Ab.

Note that Oracle's development on the Linux kernel is not comparable with MySQL, because:
- Oracle is using Linux as the main platform for their primary database product (and thus a better Linux makes Oracles platform better)
- The GPL code in the kernel is not affecting what is running on top on it (because of an exception in Linux).

Because we don't have access to a database of MySQL customers and users the only way we can get the word out is to use the MySQL and Open Source community. I would never have resorted to this if Oracle had not broken the established rules in anticompetitive merger cases and try to influence the EC by actively mobilising the customers after the statement of objection was issued.

It's very critical to act upon this AS SOON AS POSSIBLE as EC, depending on what Oracle is doing, needs to make a decision around 2010-01-05. Because of the strict deadline, every email counts!